Back before Twitter, blogs were where intense debates happened. In the year 2000, if you were an edgy youngster like myself, you post something provocative on your blog, then people would “comment” on it (kind of like an @ reply), then others would yell at you, and sometimes you’d go to their blog and yell at them, and this was known as being “blog friends.”

Around 2005, right here on Phronk dot com, I became blog friends with a woman named Dani. Dani is a pro-God, anti-choice, anti-sex-before-marriage, basically just anti-reason person who showed up on the blog to debate if gay people are really people. All people are people, IMO, even Dani, so sarcasm aside, we did have a fascinating connection as we tried to discuss difficult issues from radically different points of view.

Dani followed a man named Bob Enyart. As a conservative talk radio host and pastor, Bob had a lot of influence, none of it good. He led a series of disgusting stunts, like the harassment of doctors who perform abortions, and called for the deaths of anyone he disagreed with. When religious zealots are Christian, the word “cult” isn’t used as often as it should be, but the definition fit this group. Dani followed Bob without question, isolating her family from society through her radical beliefs. I was once privately contacted by a concerned friend of another woman who fell under the influence of Bob and his crew, and was living with some of them, becoming more radicalized every day. Bob talked about me on his show once. On Dani’s blog, I’d pointed out that he used cheap tricks that dumb people see as intellectual debate—the “if people evolved from monkeys, why are there still monkeys?” level of gotcha that right wing morons like Turning Point USA still pump out today. I guess it revolved around rocks, because he spent a few minutes trying to convince his audience that a rock can’t be murdered, and a rock is considered “dead.” Which somehow proved the Bible is right and abortion is wrong. Or something.

I thought about Bob the other day. Here in late 2021, homosexuality and abortion debates have given way to debating whether we should protect ourselves from a deadly disease spreading across the globe, or just die. I had a guess as to which side of the debate Bob would be on, and I was correct. Bob Enyart boycotted vaccination against COVID-19 and, as a direct result, died of COVID-19. 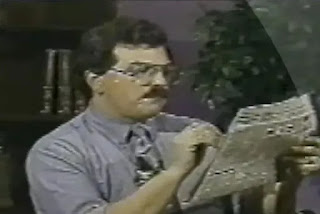 I don’t know if a rock is dead, but Bob Enyart definitely is. I have to be careful here—is it hypocritical to experience any schadenfreude from this fact? Or would that be on the same level as when Bob played “another one bites the dust” while reading the obituaries of AIDS victims? I always try to see things from both sides, which may make me a dirty centrist, but I think it’s intellectually rigorous nonetheless. On the other hand, this isn’t a matter of values or opinions; objective reality exists, COVID-19 exists, and rejecting reality in favour of delusions has deadly consequences. I’m human, and I see the dark humour when a Herman Cain Award is granted to someone I sparred with over the very fantasies that led to their demise.

As a sad footnote, Dani had parted ways with Bob Enyart at some point. That could have been a good thing, but it seems the damage was already done, or perhaps mental illness had been the driver all along. She recently showed up on this blog a few times, commenting with paragraphs upon paragraphs of conspiracy theories about Bob being a Satanic serial killer who murdered JonBenet Ramsey. She even accused me of being Bob in disguise. Well, I’m still here, and Bob is dead, so that debate should be settled.

RIP, Bob. On the off chance that you’re right about all this Bible stuff, I’ll see you in Hell.