"Shy at First Butt" – The Horrors of Internet Dating Volume 11

Welcome to another instalment of The Horrors of Internet Dating. I’ve been mostly single for a few months now, so I’m about ready to start filling the emptiness in my soul with browsing the seediest parts of the Internet and making questionable decisions.

Let’s start positive, with some people who actually seem awesome.

Ok, so usually if someone says she is HILARIOUS, the opposite is true, but this rambling, contradictory mess of a profile turned out to be legit funny. Most profiles lack personality entirely, so, more like this pls.

Ok, let’s have some more fun.

No wait, let’s not. No fun allowed. Instead, let’s get to the “horror” part:

Is there any good way to reply to a message like this? Do you really want a stranger critiquing your profile? And is this a good way start a relationship? The real answer was probably that you’re just one of the 99% of the human population that I’m not attracted to. Sometimes I have to click a profile to determine that. But after this message, the deal breaker is that you send creepy messages to people on Plenty of Fish.

There are several things to point out in the above. First, no indication of whose profile this is. Second, guy in green looks like he’s pooping. Third, random dude in the middle is the only one blanked out. Why? Did he special request to not be in any dating profile pics? Is he a secret agent or something? Is he Bansky?

People have other odd ways of protecting their friends’ identities when they apparently haven’t heard of cropping. (Only the black bars are mine in the pictures below)

I don’t think I want to meet you. Apparently standing beside you makes one a target for snipers. RIP lady with exploded head. 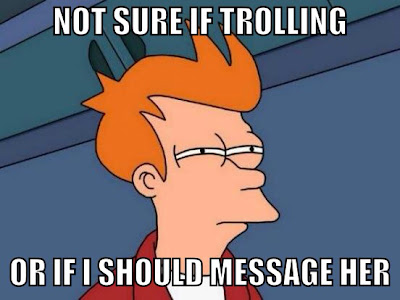 Kink is in and everything, but I’m pretty sure that’s going too far. Speaking of kink though, let’s end with a sneak preview of what will probably be my next blog post:

No problem! One Christian Grey coming right up. But don’t wait for a message…I’ll just use my riches to stalk you then imprison you in my sex dungeon. You asked for it!

Until next time. Stay sketchy my friends.